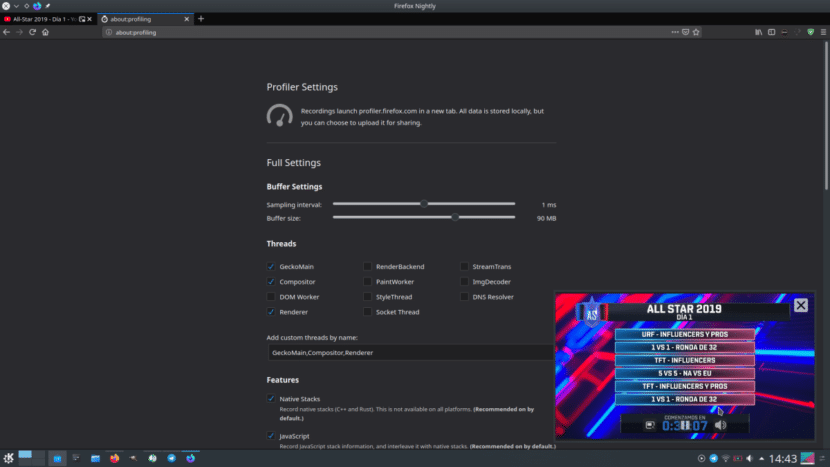 This week, Mozilla has released a new stable version of its browser. This also translates into something else: what I personally consider less important is that the Beta goes up, but a more advanced delivery is launched which in this case is Firefox 73. Today, Mozilla has advanced two changes that will come to the version of its browser that will be launched in February and that we can already test if we download Firefox Nightly from this link.

The first of the changes is a new configuration page. It's been available since the last Nightly version, so we won't see it unless we update right now. The page is about: profiling and started debating in bugzilla about three weeks ago. The other novelty that we will talk about later is a very small change, but one that is sure to be appreciated by the content devourers of services like YouTube.

Firefox 73 will arrive on February 11

Among the things we can do on the page about: profiling, currently in English only, we have the following:

The minimal about: profiling page will log the page and inject the existing UI into it, so that the mechanism works instead. This work is about lowering the architecture, with minimal changes to the existing user interface.

The other change that they have mentioned and is available from today will appear in the Picture-in-Picture. Until now, when we "took off" a video from services like YouTube, we only saw two buttons: the one to restore the window and "paste" it back to the original website, and the other to pause the video. Starting today, we can also mute video.

Personally, I think that Picture-in-Picture Firefox still needs to improve a little more. For starters, the window is so small once we take it off that we always have to resize it a bit. I would ask Mozilla to start a little bigger. On the other hand, I think it would not hurt if they added a small progress bar to be able to advance or delay the video to the point where we want, but I do not know if this would be asking too much because this in particular is something that I have not seen in Chrome or other browsers. In fact, the Google browser continues to offer two buttons once the video is taken off and we do not have a button to launch it, so we could say that its PiP is worse than that of Firefox.

In any case, these changes will be available from 11 February, at which point Firefox 73 is officially launched.

Full path to article: Linux Addicts » General » News » Firefox 73 will introduce new about: profiling configuration page and a button to mute the video in PiP