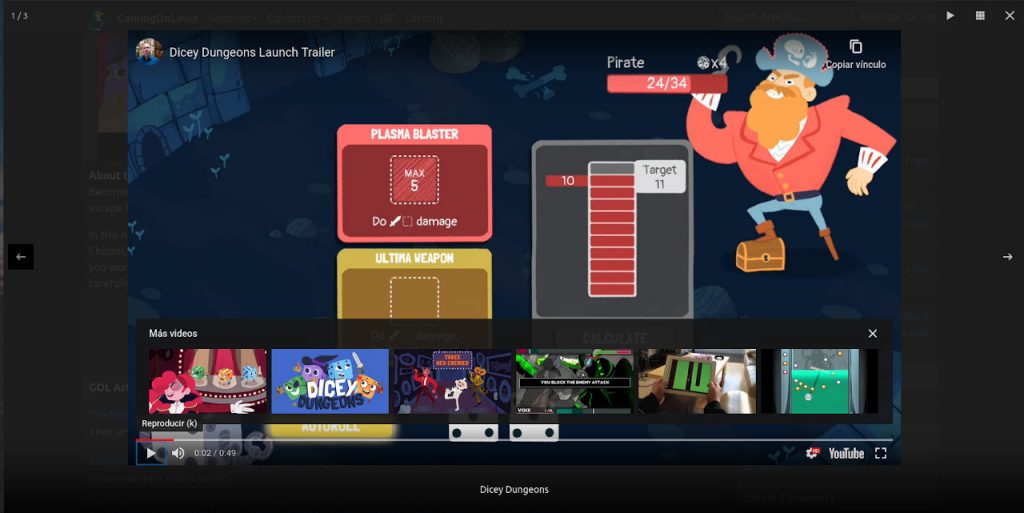 Who said there are no games for Linux? The Gaming on Linux site published the results of the 2019 edition of their annual Game Of The Year survey. Here y here! you can find which were the best tools and the best games chosen by its readers.

Now let's move on to the category where short games are awarded.

More about the GOTY. The Best Short Games According to Gaming On Linux Readers

En this game you take on the role of a giant dice that moves through a dungeon changeable to escape the whims of the Lady of Luck. While fighting monsters you must adapt your strategy to respond to what chance dictates.

You can choose from several characters with different styles of play. For example:

The other characters are; the jester, the warrior and the witch.

Enemies are not lacking either. You will face aaBlood-sucking spirits, creatures from Irish mythology, and let's not forget the soft, malevolent snowmen.

Trying to save your life by running away from the Lady of Luck's dungeon will tire anyone. And what better way to recover than with a walk in the fresh air?

Playing with A short hike we will be able to hike, climb and fly through the peaceful mountainous landscapes of Hawk Peak Provincial Park. We will have the possibility to choose to follow the marked trails or explore the countryside as we walk to the top. Along the way, we will meet other hikers, discover hidden treasures, and observe the world around us.

We are the ones who set the pace and say if we want to take some time to fish on the river bank, to swim on the lake shore or collect hidden treasures. During the trip we will meet other hikers with whom we can establish friendship and help each other.

Space mercs is a space combat game for adrenaline lovers. The developers claim that the number of projectiles and lasers on the screen is only exceeded by the number of stars in the universe.

During all missions in the game dYou will have to dodge, chase, shoot, escort and completely eliminate the enemies, from small drones to huge battleships. Only there is a rule that you must obey. "If it moves, it dies."

But, you will not have it easy. We are talking about huge battles in real time, with up to hundreds of spaceships on screen at the same time. But, if you want to start at the bottom you can start with the small ones (between 3 and 10 ships). If you are very good, you can design your own battles with up to 4000 ships.

The developers also thought of people who have little time. The "coffee break" mode organizes battles for you from 3 to 10 minutes.

Space Merc is designed to be used with keyboard and gamepad

There is no denying that Gaming On Linux readers are heterogeneous in their tastes.

If you got tired of making a living as a space mercenary now you can try beekeeping.

Hive time (Hive Time) is a simulation program for the management of an apiary. In it you must collect resources, harvest honey and have a new queen ready before the current one dies.

The game faithfully represents the different roles that each bee has within the apiary and your mission is to ensure that they fulfill them. Send the collectors out for pollen and nectar, have the builders research new types of cells, and make sure you have enough bumblebees to raise the next generation of bees.

But, do not think that the battles will be lacking. You will also have to respond to the attacks of the wasps and deal with the outlaw slugs.

En this game On an adventure, you move around a map in any way you want. Depending on where you decide to go, you will have different encounters to which you can respond in different ways.

It is a proposal that ensures fun since there is no possible result and 45 achievements available. Hundreds of animations and sound effects are also offered.

Did you play any new Linux games this year? What do you think about it? Use our comment form to tell us.

Full path to article: Linux Addicts » General » More about the GOTY 2019: The best short games of the year for Linux