Saloni Garg and Limor Fried were the winners of the Women in Open Source Awards 2019 edition. They won in the academic and community categories respectively. The choice was made through an online vote

As it is we had announced, they first met the winners of the Women in Open Source Awards 2019. This recognition seeks to honor the women who make important contributions to open source projects and communities. Also, those who make a innovative use of their methodologies.

As in the four previous installments, the winners were known during the Red Hat Summit 2019. A jury established the nominees, while the public vote chose the winners.

The nominations were divided into two categories:

The winners of the 2019 Women in Open Source awards

Saloni Garg, winner of the Women In Open Source Awards 2019, actively participates in the Wikimedia project to increase diversity in her community.

He is a student at the LNM Institute of Information Technology. Saloni is studying for a degree in computer science. He first got involved with open source communities when he entered college three years ago. Garg She is actively involved in projects for the integration of women to open source. Some of them are; Women Techmakers Group, 1 Million Women to Tech, Anita Borg and Women Who Code.

In 2018, she was chosen as an Open Leader by the Mozilla Foundation. She was awarded for a project to build inclusive communities of open source contributors to increase her visibility

In addition, contributes regularly to Wikimedia and GNOME, seeking to make their communities more diverse and accessible to all. Wikimedia is a global movement whose mission is to bring free educational content to the world. It has the support structure of the Wikimedia Foundation.

Currently, he is working on an Intelligent Vehicle project using Python and computer-assisted vision. 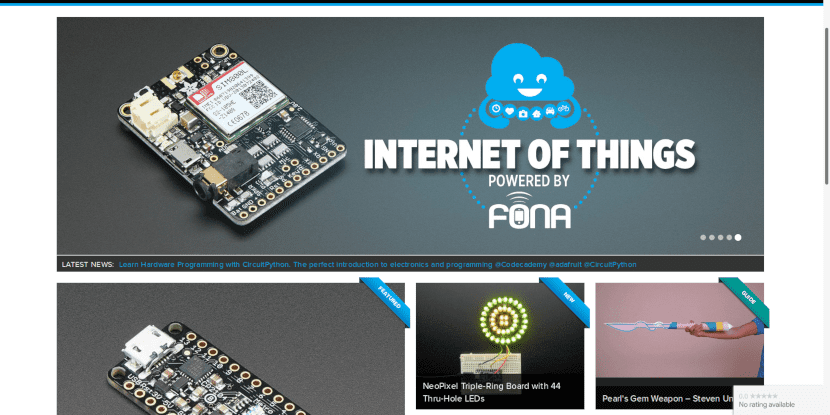 Website of Adafruit Industries, the open hardware trading company, founded by the winner

Is the founder and principal engineer of Adafruit Industries. It is a company with more than 100 employees and completely owned by women. Adafruit produces open source hardware and electronic components. In addition to his managerial duties, Fried is involved in design and promotion.

lemon personally select, test and approve each product before adding it to the Adafruit store. On the other hand, ldevised the effort to write open source tutorials at learn.adafruit.com, providing more than 1.700 designs for manufacturers to build and learn from. Furthermore, Circuit Playground Express developed an all-in-one exploratory circuit board widely adopted in schools, universities, and STEM organizations.

As a broadcaster, she conducts two cycles on YouTube:

On the other hand, she is a member of the advisory board of IEEE Spectrum magazine and is dedicated to advising other women who are small business owners.

Each of the winners you will receive a stipend of $ 2,500. They will be suggested to use them to support open source projects or efforts. Additionally, they will be featured on Opensource.com (a Red Hat-sponsored site to spread the word about open source) and will have the opportunity to speak at a future Red Hat Women's Leadership Community event.

I think this kind of initiative is the right way for more minorities to get involved in open source. Personally, I find it much more productive than the abandonment of meritocracy in favor of affirmative action adopted by the Mozilla Foundation.