In March, VideoLan consulted the community looking for album covers to post screenshots. At that time We are wondering "Is VLC 4.0 down?", But time has answered NO to that question. Also, from what we can see if we use the development version, it doesn't seem VLC 4.0, with the great change in its interface, it will arrive in the next few weeks, but we can (almost) assure that the wait will be worth it.

VideoLan has been offering VLC 4.0 for a long time now. Nightly version (here the download links). Linux users, like we explain In the past, we can test it through its Snap package, so it installs without touching the stable version of VLC and everything is safe, but we have to have a lot of patience to run it, or at least it is if we have a multimedia library (video and / or audio) quite large. After trying it again, I can only say one thing: try it ... at least if what interests you is music.

Because yes, things as they are: once we have entered the command to install the Nightly version of VLC 4.0 on Linux (sudo snap install vlc –edge), we can find something that works very slow, very slow, but we can let it collect all the information and dedicate ourselves to something else until it is finished. Once you no longer have to index anything, now it works much more fluid that a few months ago, or at least that is the pleasant impression that I have had in Kubuntu 20.04.

In addition, as you can see in the screenshot that heads this article, the interface offers everything we could wish for, as a left panel where we see the artists, a page with all the discs of the same, to which it is possible to add that all the songs appear listed, and a reproduction queue. If we want, we can make all that disappear so that only the controls and the album art are shown, something that I personally think I will do little or nothing. What I do miss and do not know if they will add in the future is the option to show more advanced controls, such as recording.

Your current Achilles heel: the video 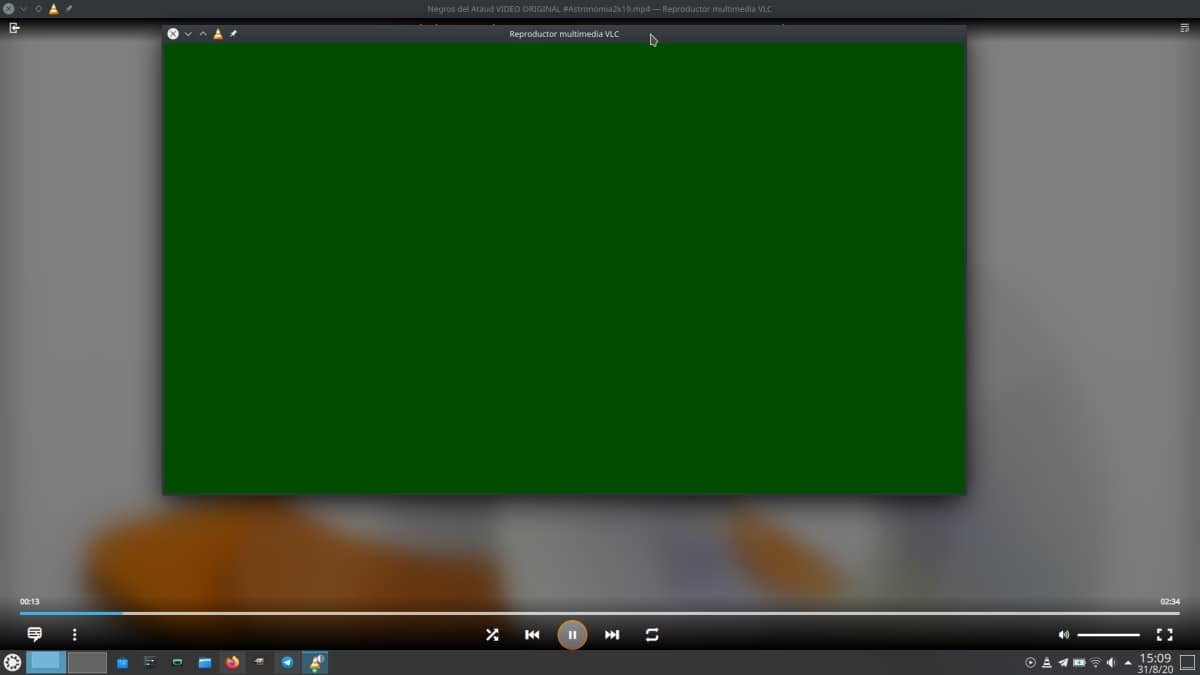 It does not work. Or it doesn't on my computer. In Windows, where I have also tried it, the videos are reproduced without problems, but in Kubuntu 20.04 we will see something like the previous capture: in the best case we will see a green background; at worst, a green background with ugly blue squares, which doesn't change things much either. And, what is worse, if we play a video, VLC 4.0 no longer allows us to do anything else, such as playing music again unless we restart the app. Logically, VideoLan will not release the new version until everything works perfectly, and this is a bug that they will solve sooner rather than later.

Speaking of the video, and something that I am not sure that I like, now play in two windows: in the main one we will see the video and there are very basic controls; In high school we will see the same thing we see when we play any other content, such as music. Taking into account that I have not been able to test it very well in Linux (and that in Windows I have decided to download the version before trying more), I can only say that it seems unnecessarily confusing, but I suppose that I / we will get used to it with the step weather.

VLC 4.0 promises, but it will take patience

VideoLan presented in February of last year the new interface of its VLC, one that looks more like the mobile version and that it will greatly improve the multimedia library. He presented it in style and I think yes, the update will be worth it, especially for someone like me who will have in an app that he already had installed for videos the music library he has always looked for, in addition to being able to use an equalizer. But you will still have to be patient for everything to work as it should. For now, and if they don't screw up the development, I'm already using it to play music and I'm delighted.

Full path to article: Linux Addicts » General » Free software » VLC 4, the great update that will become my all-in-one to play multimedia content… when it works