During the last days Tor developers released two important news, one of which is the release of the new version of Tor 0.4.5.6 (used to organize the work of the anonymous Tor network).

Gate 0.4.5.6 it is considered the first stable version of the branch 0.4.5, which has evolved over the last five months. Branch 0.4.5 will be kept as part of a regular maintenance cycle; updates will be suspended 9 months or 3 months after the 0.4.6.x branch is released.

Among the main novelties from Tor 0.4.5 we can find that the ability to build Tor in the form of a statically linked library was implemented to embed it in applications.

Besides that detection of IPv6 compliant relays was significantly improved, since in torrc, IPv6 addresses are allowed in the Address option. The relays are provided with automatic binding to IPv6 for the ports specified through ORPort, except those explicitly marked with the IPv4Only flag.

ORPort accessibility with IPv6 is now separately tracked by relay ORPort with IPv4. Relays with IPv6 support, when connected to another relay, include IPv4 and IPv6 addresses in the cell list and randomly select the one to be used for the connection.

In addition, for operators, rayleighs proposed the "MetricsPort" mechanism to monitor site performance. Access to statistics on the operation of the site is provided through the HTTP interface. Prometheus output is currently supported.

And performance issues were fixed with relays running on the Windows platform.

The other news that Tor collaborators released is that they have developed Anon-Ticket, a plugin for the collaborative development platform GitLab which allows you to submit and discuss issues anonymously without having to sign up for an account.

Anon-Ticket has been launched as a service in test mode which allows you to post messages about problems in Tor repositories, but the plugin is not linked to Tor and can be used in other projects. 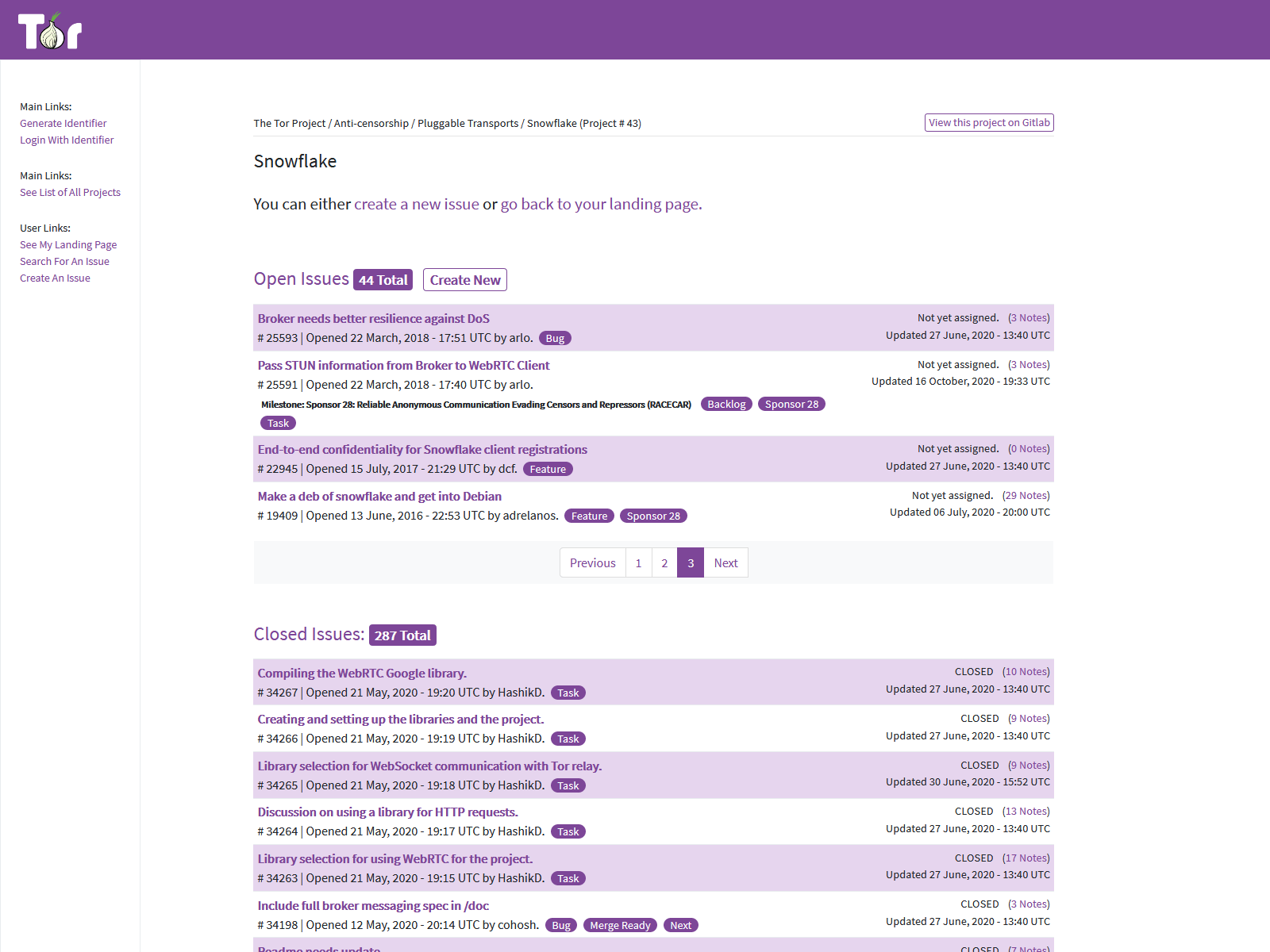 Often, users who want to inform developers about the problem abandon their intentions, having to fill out forms additional registration, transfer personal data or wait for confirmation.

Anon-Ticket will allow you to dispense with the registration, which is unnecessary when sending one-time notifications, get rid of waiting for account confirmation from the moderator, and keep your personal data and email confidential.

anon ticket allows not only to send, but also to track the status of completed tickets and publish clarifications, for which the user receives an automatically generated temporary identifier and a link to a page that can be bookmarked to control their ticket.

The interface also provides functions to view existing projects and search for tickets related to the selected project. A post moderation mechanism is used to prevent spam and abuse.

Moderators have flexible tools to batch approve or reject pending posts, as well as the ability to make edits and leave comments that are only visible to other moderators.

The plans for the future they mention the creation of an onion service, adding additional protection mechanisms, such as limiting the intensity of sending messages, and implementing the possibility of transforming an anonymous participant into a regular one (for example, when a user decides to fully connect to development, registered a GitLab account and wanted to transfer their old anonymous discussions to it).

Finally if you want to know more about it, Can check the following link.