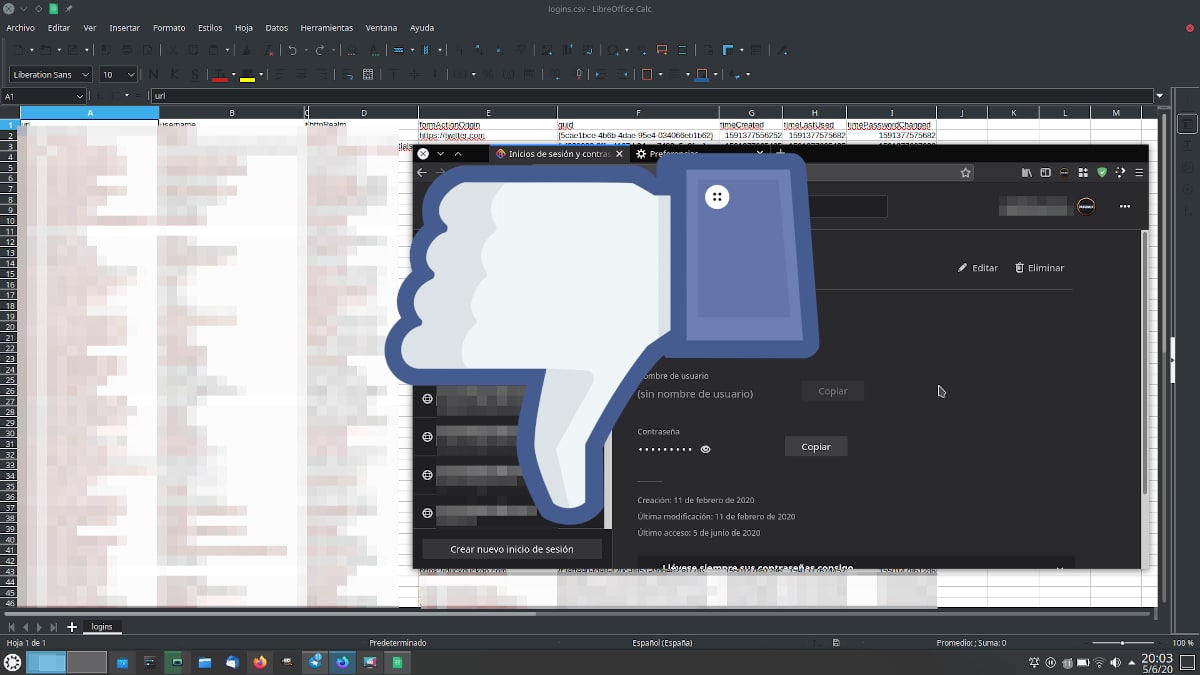 Yes. Browsers are mismanaging passwords. As this is an opinion article and so it is indicated even in the headline, I will say very bad. Fatal. And this is something that I personally had not appreciated until the launch of Firefox 79, now on the channel Nightly by Mozilla. The version that will be released in August will come with a new feature: the possibility to export all our credentials to a CSV file. In the case of Linux, at the moment it does not even ask for a password for it.

Although I have started talking about Firefox, this is something that also happens in chrome, including the possibility of exporting our passwords to the CSV file that has been available for a long time in Google's proposal, which are two of the most used browsers in the world and is also the case in many others that manage passwords. What is the problem from my point of view? Actually, two: the ease of doing things and the absence of a warning that, if we don't add a master password, all of our passwords will be snooped in a matter of seconds. It has a solution? Yes, and from my point of view, there is a very simple one that we have learned from Apple.

Apple taught us how browsers should manage passwords

Comparisons are hateful, especially on a blog like this where it is expected that only Linux will be discussed, but sometimes it is necessary to cover a little more. With that explained, let's talk a bit about the apple company. Apple has never invented any wheel, that's how it is. The only thing that the company that Tim Cook runs does is take ideas that others have had, sometimes improve them and then sell them like nobody else. Something that they have improved is the management of passwords, and now I explain why.

Although the computers I have used the most have always had Linux, I also have an old iMac and a Windows laptop. I had my iMac without a password for years, until Apple released iCloud Keychain and told me that if I wanted to use that feature, I had to password the device. I put it on. Now, if I want to see some of my passwords in Safari, I have to put the password of my user (of the operating system). If I don't put it on, I won't see ANYTHING. Neither I nor anyone else can access my credentials. This is the correct thing, without a doubt. There is no master password in the browser and the operating system was in charge of letting me know that if I wanted to have my passwords on it, I had to set a password for the login.

How Firefox and Chrome mishandle passwords

Although I had never considered it, and as I explained above I did it with the launch of Firefox 79 and its new function, neither Firefox nor Chrome ask me for anything when I want to see my passwords. The browsers assume, wrong assumption, that the user who has accessed the browser is the owner of the computer or someone registered on it. Therefore, in Firefox we can go to about: logins, access to Lockwise and see all our users, the passwords being hidden. But, what good is it that they are hidden if we can copy them to the clipboard? Of little. And the thing is not different in Chrome: we go to Preferences / Autocomplete and there they are. If we tap on the eye icon, they will be displayed. What can go wrong?

This makes us think of any case in which we leave our computer to a friend or relative. I don't know, so you can see a video of kittens on YouTube while we shower, for example, for the dinner we have arranged for that day. We did not know that this friend is not a good friend or for whatever reason wants to get our Facebook password. All you have to do is go to the passwords section, see our username, copy the password and paste it into a text document. That friend already has access to our Facebook. That easy.

This will not be the case in Firefox 79 for Windows, which will ask us for the password (of the session user) to export the passwords to the CSV file or copy them from Lockwise, but in the current Firefox 77 it allows us to copy them without entering anything. Firefox 79 for Linux continues to allow anyone to walk through our password file like Pedro at home, even if the user is not exactly the famous Pedro.

Possible solutions that they should implement now

In a query that I made to Firefox via Twitter about the Linux version, I was told that I have to set a master password to avoid that problem. What about this? That I already know, but others don't. The solution is not to guess what might happen; the solution must be offered to us by the companies. Whenever possible, I would not allow access to Lockwise without entering the user password (of the system) and I would forget the master password. If the above is not possible, and in Windows it is, browsers should notify us of this as Apple does with a message such as "either you put a master password or you will not be able to use the keychains." What I think is not an option is what exists today: if we do not take it into account and another does, we are exposed.

So now you know. Things could improve, and at least the Windows version of Firefox will, but these days all browsers, at least on Linux, mismanage passwords. Since they do not warn of what can happen if we do not configure a master password, I do it in this article, we do not have to forget that it is opinion.