Recently Britain's Secretary of State for Home Affairs signed Julian Assange's extradition request. The law marks the first step in a process in which the UK courts will take over. The first application review hearing in the United States took place today in a London court.

This process took place due to a series of accusations against the founder of WikiLeaks. One of these states claims that Julian Assange collaborated with Chelsea Manning (former US intelligence analyst) to obtain classified documents as well as gain unauthorized access to US government computers.

With the arrival of the full extradition request, Julian Assange will have to face 18 charges on behalf of the United States Espionage Act.

According to an announcement by the United States Department of Justice, Julian Assange incurs a maximum penalty of 10 years in prison for each count in accordance with the Espionage Act of 1917.

In 1917, the Espionage Act was established to prohibit interference in military operations, to prevent insubordination in the military, and to prevent third parties from supporting enemies of the United States in wartime.

In 1919, the United States Supreme Court ruled that federal law does not violate the freedom of speech of convicts under its provisions. 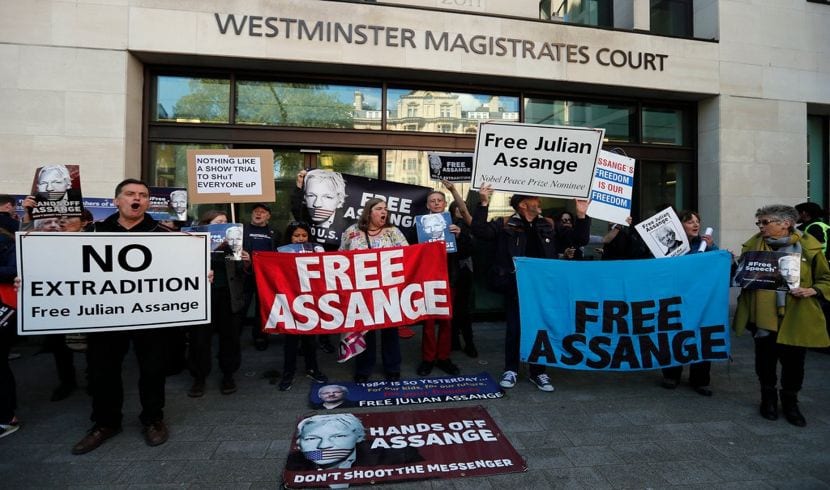 Related article:
Julian Assange enters the fight against being extradited to the United States

However, it has been the subject of controversy and challenges before the courts of that country, in particular, due to its unconstitutional nature and its direct relationship with freedom of expression.

“Mr. Julian Assange was arrested following a provisional extradition request from the United States. He is charged with crimes including misuse of the computer and unauthorized disclosure of National Defense information.

We have received the full extradition request, which has been certified by the Minister of the Interior. "This case is now before the courts and it would be inappropriate to go further in the comments," says the British Home Secretary in a publication.

“It is important that people are not misled into believing that WikiLeaks is anything other than an editor.

The government of the United States tried to deceive the press ", said Julian Assange through a video that he recorded from his cell phone.

While Ben Brandon, the lawyer representing the United States, recalled against him, even that he had hacked a password defense networkJulian Assange replied: 'I didn't hack anything.

In today's hearing, Ben Brandon pointed out that Julian Assange's actions were dangerous and that by publishing classified documents, Julian Assange created a serious and imminent risk for many intelligence sources, including journalists.

Human rights defenders and political activists suffer serious physical harm or are arbitrarily detained. Mark Summers, the lawyer for the WikiLeaks founder, complained that the charges against his client constituted a scandalous frontal attack on journalists' rights and freedom of expression.

The extradition of Julian Assange to the United States is conditional on the successful completion of a series of tests that the British authorities will carry out.

However, the Julian Assange camp is likely to use a number of levers, including that of human rights.

Indeed, fears persist about the treatment Julian Assange could suffer if he were extradited to the United States.

"If we leave Julian Assange at the mercy of this bad wind, then any journalist wherever he is can be extradited to the United States if the government of this country believes that he has published information that threatens the national security of the United States."

Finally, now it is time to wait for the Westminster Court to take place, which has scheduled a hearing at the end of February 2020.