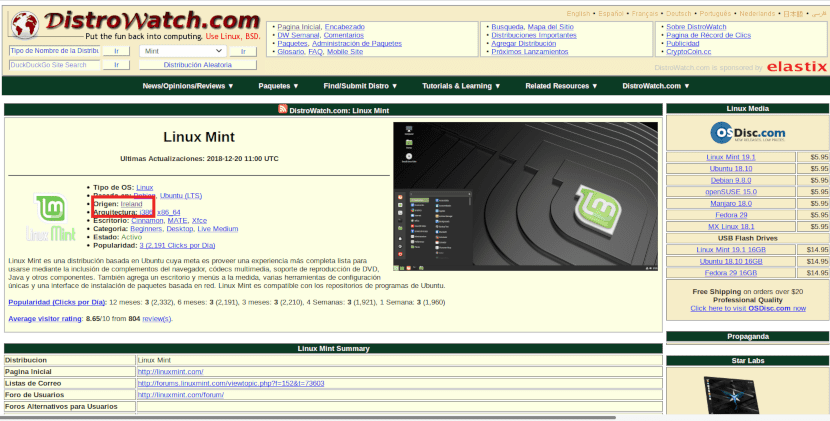 In the Distrowatch archives, Linux Mint is registered as an Irish-sourced distribution.

Among the Irish traditions is to celebrate their patron saint every March 17 with dance songs and beers. Also to do Linux distributions worth trying.

Although none of the three that we discussed is among the main ones, and only one among the best known derivatives, all of which we comment stand out for contributing something. And this is very remarkable. Most distributions differ only by name and wallpaper.

I have to confess something. The original idea of ​​this article was to propose to celebrate Saint Patrick's Day in a linux variant. Installing an Irish distribution.

Some health problems prevented me from finishing it on time, so it was only time to install Irish distributions. Distrowatch has Linux Mint registered as a distribution of that origin, although its creator and main developer is French. I am not clear if it is a mistake of the prestigious site.

But, considering that this is a blog about Linux and not the National Geographic, I do not think that the detail should concern us.

Linux Mint it is a curious case. It started out as a derivative of a derivative. Its first version only differed from Ubuntu in that it installed Flash and proprietary multimedia codecs.

I remember its launch well because in the now-defunct Ubuntu-es forum I said, playing with its name, that it didn't like anything and that it wasn't going to last. Now I use a paperweight for the crystal ball.

The big takeoff for Linux Mint came in 2012 when Ubuntu decided to go behind the converged desktop utopia and GNOME changed the rules of the game with its branch 3.

Seeking to attract disgruntled users, the developers created Cinnamon, a fork of the traditional GNOME. They also bet on another derivative of the same desk; Mate.

With the endorsement of an editorial from the influential site Distrowatch, his popularity increased. It helped the ever-fickle Mark Shuttleworth to tire of version 7 of the Unity desktop and discontinue its support. Since the long-promised 8 branch was never ready, more Ubuntu users left.

The great merit of the Linux Mint developers was not resting on their laurels. While Ubuntu and Fedora focused on the cloud and the Internet of Things, Linux Mint decided to continue to improve the personal computer user experience. with the development of its own configuration, installation and update tools.

The distribution has a version based on Ubuntu and another on Debian. The Ubuntu-based version (extended support version) comes with the Cinnamon, Mate, and Xfce desktops. The Debian derivative only with the Cinnamon desktop

Tails it is a distribution derived from Debian. It is designed to be used in Live mode from a portable device.

The reason for this distribution is to guarantee the privacy of the user. When used in live mode there are no traces left on the computer on which it runs since the only storage space used by Tails is in the RAM. The Ram is automatically erased when the computer is turned off.

All communication via the Internet must be carried out through the Tor network. The Tor network is made up of nodes managed by volunteers that prevent the origin of network traffic from being determined. In addition, if the visited sites support it, communication is done using the https protocol.

Documents and emails can be signed and encrypted using the OpenPGP tool, while storage devices can be encrypted with the LUKS standard.

Unlike the other two, Solus it is not a derived distribution. Its development was done from scratch and uses its own package manager.

Like Linux Mint, Solus also bet on the personal computer user. In your case, in addition to Budgie your own desktop, you also have versions with GNOME and Mate. KDE Plasma and i3 are available in the repositories.

Regarding the Budgie desktop, although based on the GNOME 3 libraries, its appearance is more similar to traditional desks. Windows users will feel in a very familiar environment with Solus.

The applications menu is in the lower left. The icons in the bottom panel show your favorite applications and the programs that are currently open. System indicators appear in the lower right, such as remaining power and network connectivity. And as always, there is the trust watch.

The Budgie desktop has a hidden sidebar, which contains a calendar, control of audio settings and notifications.

More panels can be added to the desktop and to these applets with different utilities.

So much pre-installed programs such as those included in the repositories They are those can be found in the main distributions Linux.